In 1763, the territory that would become Ohio was ceded by France to Great Britain as part of the Treaty of Paris, which ended the French and Indian War. The English Proclamation of 1763 prohibited white settlement west of the Appalachian Mountains, however, this proclamation was widely ignored and the area was gradually settled by American Colonists moving west. 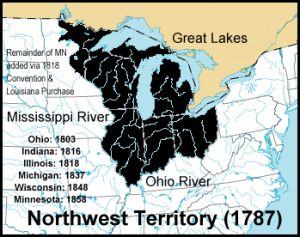 Your ticket for: Treaty of Paris cedes Northwest Territory to Britain